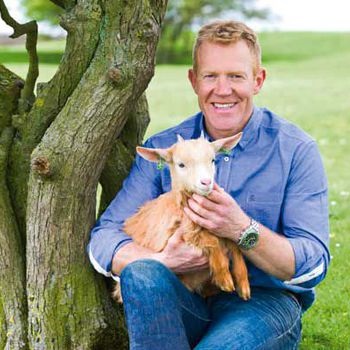 Adam Henson is a happily married man who exchanged his vows with Charlotte Henson. As a family guy, he has two lovely children from his successful life with Henson. Although he is married, the whereabouts of his marriage isn't known.  So far he's able to keep his personal life away from controversies and rumors of any kind. Further, he isn't involved in any extramarital affairs, which suggests he is living a happy life with his wife and children.

Who is Adam Henson?

Adam Henson is a farmer, author and TV presenter from England. He runs a Cotswold Farm Park and a farming related show called Countryfile. He is also known as an author for his book My Life On The Land.

Joe Henson's son, Adam Henson was born in England's Gloucestershire. He was born as Adam John Lincoln Henson on October 16, 1966. His grandfather Leslie Henson was a music hall comedian and actor for musical comedy. He is of Caucasian white ethnicity and his nationality is British.

At Seale-Hayne Agricultural College in Newton Abbot, Devon, Henson earned an HND in Agriculture where he met his business partner and friend Duncan Andrews.

Adam Henson in the very beginning of his career started as soon as he graduated and started traveling through different countries with his business partner and friend Duncan Andrews.

Before fame, he already was running his father's Cotswold Farm Park which now attracts over 70,000 visitors per annum.

Adam applied for Countryfile in 2001 and after he was assigned the show, he gained huge fame from the very beginning. With the success of his first show, Henson started working on various programs including Countryfile Summer Diaries, Inside Out, On Your Farm, and Farming Today.

He presented at the Lambing Live show together with Kate Humble and worked with Nigel Slater in November 2013 on BBC's Nigel and Adam's Farm Kitchen. Henson is also an author who wrote about his life in two books. His first book Countryfile: Adam's Farm: My Land Life was published in 2011 and his second, Like Farmer Like Son, was published in 2016.

Adam Henson Salary, and net worth

His accomplishment in his professional career has paid him well financially. So far his aggregate of wealth and net worth accounts around $2 million.

Further, his show high a high rating, along with that, he receives royalties from his book sales as well. So inclusive of all his ventures, businesses, TV shows, and Book Royalties Adam Henson receives around $250 thousand in salary.

Adam once revealed that he was scrutinized for the show Countryfile and said that he received death threats after he presented reports on Countryfile about badger culling.

Adam is a decently tall guy with a slim fit body but his exact body measurement isn't known yet. Further, he has brown hair and hazel eyes.

He is an active user of Twitter and has more than 52.6k people following him on His official twitter.