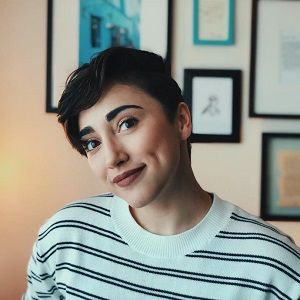 The 25-year-old, American YouTuber and singer Alex is an unmarried woman. She is bisexual and currently is in a relationship with a girl named Torri. However, there is not any information from when they have been dating.Moreover, she has never been involved in any affairs with any man to date. Additionally, there is not any information regarding her past relationship. As per the reports, Alex is currently in a relationship with her girlfriend and living elegantly.

Who is Alex Gronlund?

Alex Gronlund is an American singer and YouTuber. She is an independent singer who released her debut EP, Found, on September 25, 2012, and debut album ‘Growing Up’, in 2014. Since the beginning, she has been posting various covers on her YouTube channel. Currently, she runs a YouTube channel on which she has amassed over 1.5 million subscribers with more than 225 million views. Her cover including Payphone, Thrift Shop, Roar, and single Disney Medley has earned over 10 million views.

Alex was born on April 12, 1992, in Denver, Colorado, United States of America. Talking about her nationality, she is American and her ethnicity is unknown. She is the daughter of Brenda(mother) and Jack(father). Furthermore, she has a younger sister named Jackie. As a child, she developed her interest towards singing and also began to learn to sing from the very early age. Concerning in her education, she joined Colorado State University. After studying there for almost two years, she chose to pursue her career in music and left the college.

Alex began her YouTube career back on November 17, 2010, when she first created her channel. Since then, she has been posting various songs covers on her channel. She is an independent singer who released her debut EP, Found, on September 25, 2012. Currently, she runs a YouTube channel on which she has amassed over 1.5 million subscribers with more than 225 million views. Her cover including Payphone, Thrift Shop, Roar, and single Disney Medley has earned over 10 million views. Besides this, she is also popular on social media sites with more than 153k followers on Instagram, almost 99k followers on Twitter, and around 427k followers on Facebook. Back in 2012, she released her first Ep, Found followed by It’s You That I’ll Miss This Christmas in 2013. Both of the EPs became hugely successful. Additionally, she launched her debut album, ‘Growing Up’, in 2014. Moreover, this album climbed her at peak as it entered into the iTunes Top 100 chart and reached No. 24 on the iTunes Pop chart. Furthermore, she has also worked with several famous writers including Jason Mraz, Lauren Christy, Mikal Blue, Joey Barba, and Jason Reeves. Apart from that, she has also collaborated with Peter Hollens in her videos. Being a famous singer and YouTuber, she earns a handsome amount of money from her profession. However, her salary and net worth are unknown. As of now, she has not won any awards in her career. With all her hard works and skills, in the near future, she will definitely garb some awards.