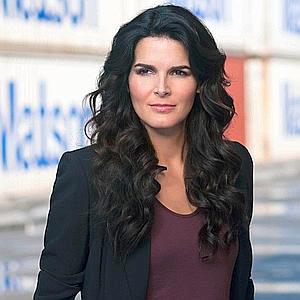 The 46 years old gorgeous lady got engaged on 13th March 2000, with the former NFL player Jason Sehorn, cornerback for the New York Giants. On the day, Angie Harmon is appearing as a guest at The Tonight Show with Jay Leno, and during the show, Sehorn came out as a special guest. Jason walked near Angie and proposed on one knee. Angie couldn't deny and replied  "Oh, my God, baby...YES!" The pair tied the knot on 9th June 2001 on Highland Park Presbyterian Church in front of their parents and their some relatives. Following the marriage, the pair were blessed with three daughters Finley Faith Sehorn born on October 2003, Avery Grace born on June 2005, and Emery Hope born on December 2008. Although their married relationship seems good, they later got separated in December 2015. Previously, the pair announced their separation in November 2014. As of now, she is living a single life with her three daughters.

Who is Angie Harmon?

Twice People's Choice Award winner Texas-born Angie Harmon is a well known American TV personality as well as model who has starred in numerous hit films as well as TV series. She is popularly known for her work on Baywatch Nights, Abbie Carmichael and from the TNT series Rizzoli & Isles.

Angie was born as Angela Michelle on August 10th August 1972 day of Thursday, in Good country Stop, Dallas, Texas, the USA. She is a parent to Greek descent mother Daphne Demar and German and Irish decent father Lawrence Paul.

Her nationality is American and ethnicity belongs to mixed(German, Irish, Scottish, and Welsh, and Dutch). She graduated from Highland Park High School in 1990 along with that she was also a member at Highland Belles.

Angie Harmon pursued her parents' footstep in the field of modeling profession. At the early age of 15, she had already won the national cover contest for the Seventeen Magazine after she beat 63,000 other young contestants in New York for a national photo shoot.

But until this browed-eyed woman entered the Spectrum Model Search, after graduation it started to operate as a specialist model. Settled in New York and then she stepped on with some prominent designers like Calvin Klei, Giorgio Armani, and Ralph Lauren.

She also presented herself at different magazines such as Vogue, Bazaar Cosmópolitan, GQ and Esquire.

YouTube: Angie Harmon Is Always The Man In Lesbian Fan-Fic

Her first stage started when David Hasselhoff invited her to attend an audition for the leading female role in a spin-off for the popular TV series, "Baywatch"(1989-2001). Even though her knowledge in working at the moment was none, the manufacturers thought that her portion was really fit, Angie took the chance to appear and quickly featured in "Baywatch Nights" as a detective, Ryan McBride.

She joined in the show until it ended in 1997, and in the same year, she received due exposure, promoting herself to others like Lawn Dogs, the John Duigan comedy project, and a short-lived "C-16: FBI" TV series, before entering "Law & Order"(1990)in 1998.

Well THAT was FUN! ITS A BEAUTIFUL DAY IN THE NEIGHBORHOOD! We’re in a New York State of mind! @gregvaughan @kanakanate @markreddy1 @trishashetty @unicefusa @worldrelief #blessed #grateful #nyc Stay tuned for part 2!! 😂❤️

In this NBC award-winning show she was lastly allowed to accept the touch of notoriety by portraying the adventurous, senior deputy county lawyer titled Abbie Carmicheal because her public and criticism commended her execution so much.

Angie Harmon: Salary and Net Worth

Angie Harmon, a multitalented personality has accumulated a great sum of income from her professional career. Harmon's net worth is evaluated well around $20 million as of 2019. Besides, she also paid a handsome salary from her profession as an actress and model.

She has starred in numerous high budgeted movies and TV series from where she garnered huge sum of pay sum.

Angie has not been in such bits of gossip and discussion till date. Being one of the renown social media star and model as well as an actress she has succeeded in being far from being gossips tidbits.

Have You Missed: Jasmine Dustin Biography

Angie Harmon body measurements are 34-24-34 inches. Besides, Angie has a gorgeous lady with a stature of 5 feet 9 inches and has a body weight of around 59kg. She has dark hair and darker brown eyes. Her bra size is 32B, dress size is 2US and wear a shoe size of 8US.