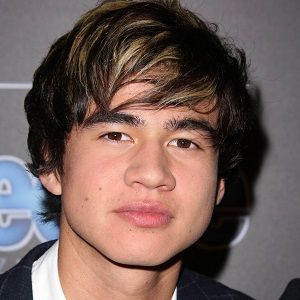 He is  possibly single now.Calum Hood has been in relationships with Lucy Kaufmann, Nia lovelies, and Caitlin Davis. Hood is rumored to have hooked up with Samantha Alaimo.

Calum Hood is one of the members of Australian famous band "5 Seconds of Summer". He is known as the backing vocalist and bass guitarist of the band alongside the other band members like Luke Hemmings, Michael Clifford, and Ashton Irwin. Their debut single “She Looks So Perfect” topped the charts in Australia, New Zealand, Ireland, and the UK. Their debut self-titled album peaked at no. 1 in 11 countries.

Calum was born on January 24, 1996, in Sydney, Australia. His father’s name is David Hood and likewise, her mother’s name is Joy Hood. He has a sister named Mali-Koa, who is a singer. His birth sign is Aquarius.

Hood went to Norwest Christian College in Riverstone, New South Wales. Other information about his education history is unknown.

He was studying at Norwest Christian College when he met his band members Ashton Irwin, Michael Clifford, and Luke Hemmings for the first time. They became good friends and thought of forming the band. He dropped out from the school to begin his music career. They first started as YouTube celebrities covering different songs by popular singers. Their one of the most hit cover songs is Chris Brown’s ‘Next To You’ it received over 600000 hits on YouTube. The milestone of their career is when they were invited to do the opening act for the world tour of the most famous and loved band of America One Direction. After that, they were able to gather the attention of a million people including some labels and publishers. In early 2014, the band released “She Looks So Perfect” worldwide as its debut single, which topped the charts in Australia, Ireland, New Zealand and the United Kingdom. The self-titled debut studio album was released in June 2014, which peaked to no. 1 in 11 countries. Some of his personal facts are he is huge at football he actually gave up his dream to be a footballer.

Calum Hood: Salary and Net Worth

Hood is part of one of the renowned band and so must have good earning. His net worth is $10 million.

Different rumors were spread claiming that he allegedly had sex with his fans while on tour. He is also rumored to have hooked up with Samantha Alaimo. There were also different gossip that he was leaving the band as to have an ordinary life with his reputed girlfriend.

Hood is active on different social media and keeps on updating them with his latest work and photos. He is active on Instagram more than 5.1M followers. Hood is seen active on Twitter and his  7.21M followers. He uses Facebook and has more than 300K followers on his Facebook Account. Also get to know more about drummer and guitarist of the same band, Ashton Irwin, He is also Hood’s friend. Updated On Wed Oct 03 2018 Published On Wed Oct 03 2018 By Married Bio