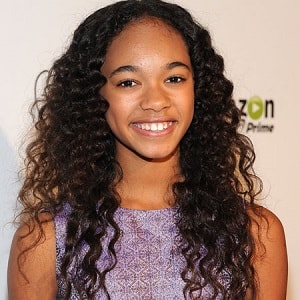 As Chandler Kinney is just 17 years of age, she is still young to get involved in any serious relationships. There is no information regarding any boyfriends that she might have had throughout her schooling years. Currently, it looks like she is more focused on her career rather than being in a serious relationship.

Who is Chandler Kinney?

Chandler Kinney is an actress and dancer from America. People mostly recognize her from movies and television shows like 'Lethal Weapon', ' Gortimer Gibbon's Life on Normal Street', and 'Girl Meets World'.

The talented African-American star's involvement in acting training is currently a high school student. She trained with the Los Angeles Ballet Academy, the Debbie Allen Dance Academy and the Kirov Academy of Ballet in Washington DC on scholarship. She is currently studying at the Marnie Cooper School of Acting. Chandler Kinney is currently a high school student and we don't know what are her plans for her college and which college is she looking forward to joining after the completion of her high school.

Chandler Kinney's Career, and Net Worth

Initially, Kenny was only involved in dancing and appeared in commercials. Her first-ever professional TV commercial was for Sony Pictures Studios in Culver City for US apparel retailer GAP. She so far has appeared in two national commercials.

Kinney in 2012 appeared in Chris Stokes' dance movie 'Battlefield America'. Later in 2013, she appeared in Taylor Hackford's Drama 'Company Town' which was one of the critically acclaimed movies she ever worked in.

Some of her other movies and television series are 'American Horror Story', American sitcom 'The Haunted Hathaways', 'Girl Meets World', and Gortimer Gibbon's Life on Normal Street.

However, her role as Riana Murtaugh in the TV series 'Lethal Weapon' is possibly the work which received a huge appreciation and slingshot her to the celebrity status.

Besides being a successful actor, Kinney is also a model and a professional dancer. She is a well-trained dancer who knows dance forms such as ballet, pointe, jazz, modern, and hip-hop. In addition, her dance team competed in New York's YAGP or Youth America Grand Prix finals.

As of 2019, Kinney hasn't revealed her current salary and net worth but we believe she receives over $35 thousand per TV appearance and her current net worth should be well over $250 thousand. Further, she is one of the busiest Teen stars. as she has her hands on every possible branch of entertainment. She is a known actress, a dancer and model, and a social media personality

Kinney has never been dragged in any significant controversies till date. Moreover, there are currently no rumors in regards to her personal life either.