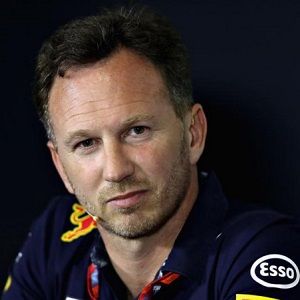 In 2000, Horner was married to Beverley Allen. The couple shares one daughter Olivia Horner born in 2013. The couple was together for around 14 years and nearly after one and a half decades, they broke up in 2014. Later, Christian dated former Spice Girls member Geri Halliwell six months later after his separation from Allen in 2014. The couple then got engaged on 11 November 2014 and tied their knot on 15 May 2015 in Woburn, Bedfordshire. From his second marriage, he is blessed with a son named Montague, born in January 2017. Also, he has a stepdaughter Bluebell Madonna. Currently, the couple is living a happy married life together with no signs of divorce.

Who is Christian Horner?

Christian Horner is one of the youngest members of the Infiniti Red Bull Racing Formula One Team's Principal working in the position since 2005. Other than that, he is also a Formula One race car driver.

Before he formed a motor parts organization with his dad to supply vehicle's parts in the English Midlands, his grandfather served as a purchasing manager at the Standard Motor Company in Coventry.

There are currently no records regarding his childhood as he has not yet revealed about it anywhere in the media.

Talking about his educational background, he attended Arnold Lodge School in Leamington and then privately joined Warwick School.

Christian Horner, after winning a Formula Renault scholarship in 1991, launched his motorsport career. He then competed in the British Formula Renault Championship with Manor Motorsport in 1992. He ended the season becoming the highest-placed rookie and a race winner.

Dave Richards 'Prodrive organization purchased a 50 percent shares in Arden before the start of 1999 on behalf of the Russian oil business Lukoil. However, Horner purchased back Prodrive's share after a season in Arden.

Horner then took retirement from race-life at the end of the season to focus the Frederick team's growth. However, after retirement from competitive driving at the age of 25, Horner contracted with Marc Goossens and Viktor Maslov for the 1999 FIA F3000 season.

He was ranked second in the championship after winning three races in Euro F3000 in 2000. The Austrian Energy Drink Company, Red Bull, purchased the Jaguar F1 Team at the end of 2004 and subsequently renamed them Red Bull Racing. They nominated him next year, and he became the youngest head of the team.

He also was in a search for an opportunity to move into F-1 championship but couldn't get it. He was then appointed to head the Red Bull Racing team in January 2005. After that, on the occasion of the Queen's Birthday in 2013, he was appointed as the Officer of the Order of the British Empire (OBE) for services to motorsport.

Horner got a Product Renault scholarship in 1991 which shows how great of a race car driver he was in his prime. He has also been awarded the British Product Renault Championship. In 1991, He became the Red Bull team's head.

Christian Horner earns a good amount of annual salary from his profession but his actual remuneration for his job isn't revealed to the media.

As a successful Red Bull Racing Formula One Team's Principal, racer/promotor and a businessman,  Christian Horner's current net worth is estimated at $20 million.

The racer has not yet been in any controversies because he is effectively preserving his professional and private life away from the media. Thus, no such documents and information currently link him to any rumor and controversy.

Christian is 5 feet 8 inches tall man who weighs around 68 kgs. He has light brown hair and a pair of green eyes. In short, he is one of the most attractive racers with a very attractive personality.