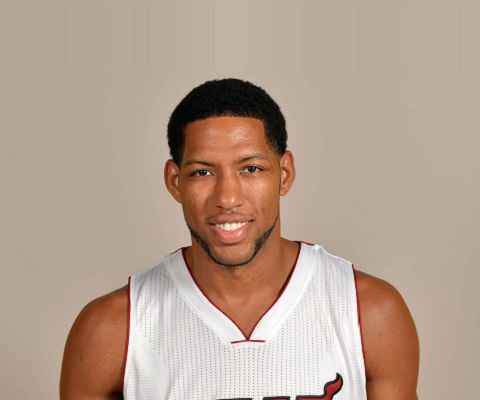 Six Foot Eight Inches tall NBA star Danny Granger is married to Dionna Kann Granger. The couple tied the knot after their years-long affair in 2009. Further, they have lovely twin children, Jaxon and Jade. The couple so far lives a happy life distant from rumors or controversies. So Far none of the married couples has allegedly cheated on each other and are busy parenting their twin boys.

Who is Danny Granger Jr.?

Six Foot Eight Inches tall NBA star Danny Granger is an exceptional American Basketball Player. Currently a free agent, who plays as a small forward and occasionally power forward. After retirement from Miami Heat, he is currently working as a studio game analyst for the CBS Sports Network.

He is one of the very best Basketball players the sports has ever seen. The African-American player was born to Danny Granger Sr. and mother name Janice Granger. He was brought up in a religious family unit of Jehovah’s Witnesses along with two younger siblings Scotty Granger (singer-musician and a lyricist) and sister Jamie Granger.

He studied at Grace King High School in Metairie, Louisiana, where he was the nominee for McDonald's All-American player. He attended Bradley University but transferred to New Mexico University where he graduated in civil engineering.

After he transferred, he said Braves head coach Jim Les's verbally abusive nature and difficult to follow tactics was the reason behind his transfer.

Granger was selected 17th overall by the Indiana Pacers in the 2005 NBA draft. After averaging 7.5 points and 4.9 rebounds in 78 games, he was named to the NBA All-Rookie Second Team. His contract with Indiana Pacers was worth $9,930,500.

He was a starter at the T-Mobile Rookie Challenge during the All-Star Weekend in Houston on February 17, 2006, where he had nine points, three rebounds, two assists and a blocked shot in six minutes and was able to score 2 3-pointers from four shots.

In 2007–08, Granger became the leading scorer of the team with an average of 19.6 points per game. On November 5, 2007, he was named the Week's Eastern Conference Player for games played Tuesday, October 30 through Sunday, November 4. It was his first and only NBA Week honored player. He set a franchise record by making 65 straight free throws in 21 till February 22 beating Reggie Miller's record of 2005.

On October 31, 2008, Granger penned a $60 million-five-years extension deal with the Pacers. The new contract with incentives could have pushed his total earnings near to $65 million.

Granger became the first player in NBA history to lift his scoring average of at least five points per game in three consecutive seasons in 2008–09, and the first Indiana player to average over 25 points per game in over 30 years. He ranked fifth in the NBA with 25.8 points and was named Most Improved Player of the NBA.

Granger scored 20 or more points in a career-high 16 straight games from December 15 to January 19, tying the longest streak in the NBA history of Pacers. He scored 35 or more points in each game in a three-game span from January 3-7 and is the only Pacers player ever to do so. He was playing in his first and only NBA All-Star Game in February 2009. Because of injury, he missed a total of 15 games as he tore a tendon in his right foot.

In 2009–10, Granger led the Pacers with 24.1 points per game, the NBA's eighth-best and the Eastern Conference's third best. He scored 20 or more points in 45 out of 62 appearances and scored 30 + points 16 times. On March 26, 2010, he scored a career-high 44 points against Utah Jazz. He missed a total of 18 games due to injury or illness, including 16 straight in December and January after he tore his right foot's plantar fascia.

He was also 2010's summer Olympic trooper for the US national team at the 2010 FIBA World Championship where he was able to bring home the gold.

For the fourth season in a row, Granger was the Pacers ' leading scorer in 2010–11, with 20.5 points per game, 16th best in the NBA, and his third consecutive season with 20 + points per game. He scored double in all but four games and scored 20 or more points 39 times with 30 + points nine times. He took a career-high 17 rebounds in a losing game against New York Kinks on January 2, 2011.

Granger was the leading scorer of the Pacers for the fifth consecutive season in the lockout-shortened 2011–12 season — his 18.7 points per game ranked 22nd best in the NBA.

Granger missed the 2012–13 season's first 55 games with left knee tendinosis. He played five games between February 23 and March 3 before being put back on the inactive list and finally having knee surgery on April 4.

Granger missed the 2013–14 season's first 25 games with a strained left calf. Indiana fans gave Granger a standing ovation on December 20 when he made his season debut in the first quarter of the Pacers ' 114–81 win over the Houston Rockets and sang his name when he finally made his first basket, a3-pointer, early in the fourth. He appeared for the Pacer averaging 8.3 points in 29 games (2 starts), 3.6 rebounds, and 1.1 assists in 22.5 minutes per game.

On February 20, 2014, in exchange for Evan Turner and Lavoy Allen, Granger was traded to the Philadelphia 76ers as 2015's second-round pick. He was bought out by the 76ers on February 26, and two days later he signed for the rest of the season with the Los Angeles Clippers.

Granger signed with the Miami Heat on July 14, 2014. On February 19, 2015, he was traded to the Phoenix Suns in a three-team trade involving the New Orleans Pelicans. However, due to knee problems, he did not play for the Suns in 2014–15.

He was traded to the Detroit Pistons on July 9, 2015, along with Reggie Bullock and Marcus Morris, in exchange for a second-round pick in 2020. He spent the pre-season in Arizona rehabbing from knee and foot injuries, and the Pistons waived him on October 26, 2015.

Danny Granger: Salary and Net Worth

Danny Granger throughout his successful career has earned over $70 million in earning. Further, the star basketballer has reportedly received over $1 million in salary in his active years. For now, he is hosting a sports show in CBS sports and is a TV sports analyst and earns $300 thousand a year from the sports network.

After Danny was traded to Phoenix as part of the Goran Dragic trade, he failed to make any significant contribution to the club, hence he was let go; this was later known after the team's coach openly admitted that Danny was slowing the team down.

Danny has over 326k followers on Twitter and has over 36k people following him on his official Instagram.