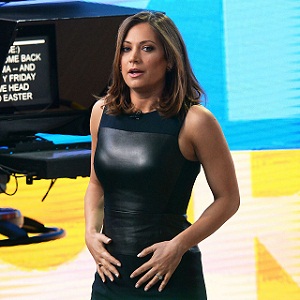 One of the TV personality Ginger Zee's current status is married. Well, on 7th June 2014, in Petoskey, Michigan Zee married Benjamin Aaron Colonomos, her long-time boyfriend, who is also a WNBC figure. The couple dated each other for several years and later shared wedding vows.  Following the marriage, 29th June 2015, Zee announced she along with her husband is expecting their first child in 19th December 2015. As of now, the pair were living a blissful life in their home country US.

Who is Ginger Zee?

Ginger Zee is an American TV personality and Meteorologist for Good Morning America and ABC World News Today on ABC.

Zee also was an ABC meteorologist for their weekend show for years. Now, she operates as a Chief Meteorologist for all ABC News programs. Despite she was diagnosed with Narcolepsy at the age of 21, she is one of the highest achieving meteorologists at ABC.

On 4th March 2016, she appeared in the popular ABC reality series Dancing with the Stars in its 22nd season and was considered as one of the finalists from the very beginning of the show.

Zee was born as Ginger Renee Zuidgeest on 13th January 1981, in Orange, California to father Robert O. Zuidgeest and mother Dawn E. Zuidgeest-Craft. Her nationality is an American and belongs to Dutch ethnicity.

Zee in 1999, she attended Rockford Secondary School in Rockford, Michigan and later she enrolled at Valparaiso University where she obtained her Bachelor's degree in Science Meteorology and majored in mathematics and Spanish.

Initially, after her graduation, she started to work on several networking channels such as  WYIN-TV,  WLAV-FM, WBMA-LD ABC 33/40, Alabama as an intern, WMAQ and NBC.

She worked as a TV reporter for several networks in several places such as  Merrillville,  Michigan, Chicago, and Illinois.

She also often appeared on  ABC programmings such as Nightline and ABC World News. Besides, on 2nd December 2013, ABC News published she would be promoted to Chief Meteorologist for Good Morning America as well as weather editor for ABC News.

Ginger Zee: Pay and Net Worth

Ginger Zeeestimated net worth is well over $5 million and her annual salary as a head of meterology department in ABC network is reportedly over $400 thousand per year. Moreover, the primary source of her net worth is from her professional career as a TV personality.

She was once caught in a dispute when she was a contestant in a celebrity dance-reality show Dancing with Stars because after another celebrity Nyle DiMarco's husband was angry about her.

There were also disputes that, despite her poor results, judges supported her.

Have You Missed: Jessica Hayes Biography

Ginger stands at a height of 5 feet and 7 inches and her body weight is around 56kg. Besides, she has blue eyes and brown hair. She has a body measurement of about 34-25-34 inches. Her bra size is 32B and dress size is 2US.