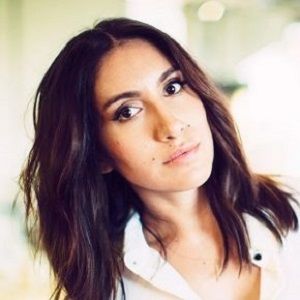 Jen Atkin is a married woman. She is married to her longtime boyfriend, Mike Rosenthal. He is a director and photographer by profession. They met for the first time at an Oscar party at the Peninsula Hotel. Later, both of them had to go Paris for their work and they hung out together and also kissed for the first time.After being in a relationship for five years, the couple got engaged. Then, when they went for a summer vacation in Greece, Mike proposed to her. Then the couple got married at the Jardin du Luxembourg park in Paris, where they went for the first date. They got married in a different style.They both and the one to officiate their wedding were present while getting married. Later, after being legal they called their closed friends and family for their wedding ceremony. She did her own hair and makeup for her wedding day.

Who is Jen Atkin?

Jen Atkin is a famous hair stylist for American celebrities. She is best known as a famous hairstylist and Mane Addicts brand founder. A litany of high-profile celebrities such as Khloe Kardashian, Jessica Alba, Katy Perry, and Sofia Vergara is her regular clients.

Atkin was born in Utah, the United States of America, as Jen Atkin on March 10, 1980. She is of American nationality and Mormon ethnicity. She grew up in Oahu, Hawaii's Mormon community. Her parents are now living in Utah. Her family lived in St. George, Utah, by the time she was in high school.

Jen moved to Los Angeles to seek a pro-hairstyling career in 2000 after completing her high school. After around six to eight months, she heard about Estilo salon searching for A receptionist and who would have thought, that she was unknowingly placed in a position which will later define her career as a celebrity stylist. There she first colored Jessica Alba's hair, while Alba was Dark Angel.

Estilo promoted her to the position of manager a year and a half later. It took her two to three years at Abram Friedman Occupational Center to work as a manager to save enough to go to beauty school. She started working as an assistant to the stylists as she was in school to get hours for her cosmetology permit. She also worked in the salon, was a hostess at night and went to a class in her remaining time.

Atkin got her degree and permit in about a year and a half. About this time, Chris McMillan opened up his own salon in Beverly Hills, and Atkin went to work with him as a collaborator.

Chris McMillan opened his own salon in Beverly Hills around this time, and Atkin went to work as an assistant with him. Andy Lecompte, one of the stylists, was on the rise. Andy had just begun to do the hair of Madonna and asked her to help him. Atkin's first big name customer was the famous Friday Night Lights actress Minka Kelly, who she met through some close companions.

She then began to work on Amanda Bynes, Lindsay Lohan, and Nicole Richie. Atkin spent 2 to 3 years at the salon working full time and during my off hours' building celebrity customers. She would work for eight hours, then do somebody for a 1600-1900 hrs red carpet, and worked almost always on her off-days. Atkin with her continuous hard work officially settled herself in the salon world. She also needed to work the shows at New York Form Week.

Lorraine Schwartz presented her to John Galliano, who at the time was the head of Dior. For 2 years, beginning in 2008, Atkin worked with Galliano & did hair for his shows in New York, Paris, & China.

From that point forward, she is working at the Rita Hazan Salon in New York City and she also works with Beauty Femme in Dubai from around three years now. She still works out of Andy's salon in L.A.

She first met Kim Kardashian around five years ago in the course of her work. Kim had seen a portion of her work on Sophia Vergara with Atkin and approached her to do her hair for a front of Cosmo in Miami. On set, she met Khloé too.

In 2013, Atkin had a plan to begin a site that is just about hair styling. She wanted to do motivation photographs & have video instructional exercises of young ladies doing their own hair, genuine exhortation ladies could use at home, & catalog of beauticians to give them a place to sparkle. Mane Addicts went online in 2014.

Jen Atkin: Salary and Net Worth

There are not much of rumors and discussions in concern to Jen Atkin. She has hence, figured out how to keep her picture clean according to the general public.

Jen Atkin has light brown hair and dark brown eyes. Moreover, there are no insights with respect to her body measurements.