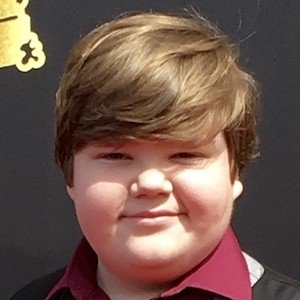 Talking about his relationship, he is living a single life so happy as he is focusing on his career. Also, even he is dating someone, he has not revealed anything about it. He does not share his personal life in public. Moreover, he has not yet been spotted by anyone in public places. There is no information regarding his relationship.

Taylor was born in Bluff City, Tennessee, the United States on June 2, 2003, to parents Michael Taylor and Tracy Taylor, his mother is a band manager. He has five siblings. He belongs to American nationality and English ethnicity. His birth sign is Gemini. Talking about his education, there isn’t information regarding his education and academic achievements.

Saying about His current professional life, he was signed to a contract by a talent manager at the age of eight after which he began his acting career. During 2011, he appeared as Albert in the family sitcom ‘Reed Between the Lines’. Two years later, he appeared in the biographical sports film ‘42’. Similarly, he was cast in a minor role in the flick ‘Ant-Man’ in 2015. On the same year, the actor got featured in the animated movie ‘Alvin and the Chipmunks: The Road Chip’. Likewise, Taylor also acted in the TV film ‘The History of Us’ in which he played the role of young Chris. Similarly, his next starred in six episodes of ‘Good Behavior’. Finally, in 2017, Taylor was cast as Benjamin “Ben” Hanscom in the horror supernatural movie ‘It’ alongside Jaeden Lieberher and Finn Wolfhard. He is an American actor, who has done commercials for Disney’s DreamWorks and Cartoon Network as well, is currently filming his new big screen projects.

Talking about his achievements and awards, he won MTV Movies and TV Awards for Best On-Screen Team for “IT” (2018)

Income and Net Worth

his salary and net worth he earns the decent amount of salary but his net worth is around $ 500-600 thousand.

Talking about his body measurement, Jeremy has a height of 5 feet 2 inches. Additionally, he weighs is 55 Kg. In addition, his hair color is brown and his eye color is brown.

Taylor is active over the social media like Instagram and Twitter. He has 145K followers on Twitter. Similarly, he has 894K followers on Instagram. But he doesn’t seem to be active on Facebook. Reference (Wikipedia, IMDb, www.thefamouspeople.com) Also, read the career, salary, the net worth, controversy, and the bio of American actor Chace Crawford, Jonathan Davis. Updated On Wed Oct 03 2018 Published On Wed Oct 03 2018 By Married Bio