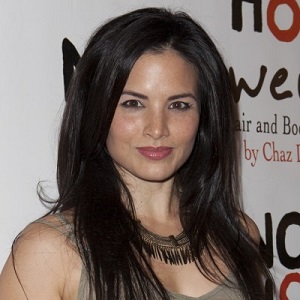 Katrina Law is a married woman for a long time. She is married to her long-time partner Keith Andreen. The couple dated each other for several years before getting married. After years of their affair, the couple got married on 5 January 2013.Katrina and Keith have been married for over four years now and their relationship is going very well. There is no any record of their children till now.

Do you Know Katrina Law?

Famous by her nickname Kat, Katrina Law is an American actor best known for playing the roles of Mira in the Starz television series, Spartacus: Blood and Sand and Spartacus: Vengeance. Katrina is also famous for portraying the character Nyssa al Ghul on The CW television series, Arrow. Further, the TV actor is currently married to another TV actor Keith Andreen.

Katrina Law was born on 30 September 1985, in Philadelphia, Pennsylvania, USA and grew up in Deptford Township, New Jersey. Born of a Taiwanese mother and German-Italian descent father, she is a biracial actress with Caucasian-Asian heritage. Her nationality is American and she is of German, Italian, and Taiwanese ethnicity. Other than being a beautiful actress, she is also a beauty pageant winner. As a teenager, she has crowned Miss New Jersey Teen USA and represented New Jersey State at finals on national television. At that time, she was also a member of The National Honors Society.

Katrina Law began her career as an actress in 2000 in a movie Lucky Numbers. The following year, in 2001, she appeared in a movie called Bottomfeeders as Ursula. Again in 2001, she gave a shot at TV acting and debuted as Ani Bailey in the TV film Third Watch. Further, Katrina Law worked with director Adrian Picardi and producers Eric Ro and Don Le in a web series The Resistance. After appearing as Mira in the hit series Spartacus: Blood and Sand in 2009, Katrina Law became a world known actress. She again appeared as Mira in Spartacus: Vengeance in 2012. Currently, she plays a recurring role of Nyssa al Ghul in the famous CW television series Arrow. In 2016's famous TV series Legends of Tomorrow, she continued her DC-CW character Nyssa al Ghul. Further, in 2017, she was casted as a lead in Training Day as Detective Rebecca Lee. As of 2018, the famous Arrow actress Katrina Law has an estimated net worth of $2 million.

Currently, we here no rumors regarding her personal and professional life or affair in the media. Though she was once rumored that she was pregnant, she strongly denied it and outed that she and her husband aren't expecting any new member into their lives.