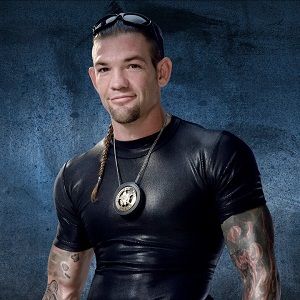 Leland Chapman is a happily married man. He tied the knot with Jamie Pilar Chapman as his second wife. Initially, Leland and his first wife Maui Chapman got married in 1995 after dating for several months. However, there were disputes between the couple when Leland was serving his sentence in jail. It was rumored that he had external affair at that time. As a result, they divorced on 21 April 2005, after carrying ten years of beautiful married life. They also have two sons together named Dakota Chapman and Cobie Blaine Chapman. After separating with Maui, Leland began dating with Lynette Yi and also welcomed a daughter named Leiah Breanna Chapman. However, the couple couldn’t carry their relationship so long and later split up. Despite his early failed relationship. Leland is currently enjoying his married life with his wife Jamie Pilar Chapman. The couple regularly posts their photo with his daughter on Instagram. As of now, the pair is enjoying their company and living soundly.

Who is Leland Chapman?

Leland Chapman is a former bail bondsman and bounty hunter from America. He is also a TV personality in which Leland appeared in the popular programs such as Dog and Beth: On the Hunt and Dog: The Family Speaks (2006). Furthermore, Leland also runs a reality show named Dog the Bounty Hunter along with his family.

Leland Chapman was born on December 14, 1976, in Groom, Texas, United States. He is the second son of Duane Chapman Sr. and La Fonda Sue Darnall. His childhood was not so easy as his father went to prison when he was just seven months old. At the same time, his parents divorced and his mother married to another man. Furthermore, Leland had not the right to see his father. At the age of eight, he only saw his father another time. As a teenager, he grew up with his mother alongside his brother Duane Lee Chapman Jr. in Colorado Springs, Colorado. From the young age, he began to run away from home didn’t attend school and finally entered into a gang. As a result, his mother put him in a foster care. Talking about his education, Leland completed his high school from Rampart High School.

Leland Chapman began his career working with his family’s bail bonds company named Da Kine Bail Bonds. In the company his other family members Beth Chapman, Duane Lee Chapman, and “Baby” Lyssa Chapman also worked. Later Leland established a new company, Chapbros Media along with his brothers, Duane Lee and Wesley Chapman. However, it doesn’t run for a long time and later shut down. In 2012, Leland and his brother Duane Lee both left the show. After the news came out, Beth Chapman stated, “It will take 6 weeks to get thru the whole thing tonight’s just the beginning”. After leaving the show, Leland Chapman formed his own Bail Bond Company. In addition, he also carried his dad’s business named Da Kine Bail Bonds in Hawaii. Leland has appeared in the new show Dog and Beth: On the Hunt. On the show, he featured along with Dog Chapman and Beth Chapman. Moreover, he is also a professional boxer, kick boxer and extreme fighter. Leland is earning a massive amount of money from his business and TV shows. Currently, he has an estimated net worth of $2 million. Furthermore, he is making around $ 75000 annually as a salary. So far, Leland has not won any awards. However, his works have been appreciated by his fans for a long time.

Once Leland was dragged into a controversy when he was jailed alongside with Duane “Dog” Chapman and Tim Chapman. They got arrested by U.S. marshals and had to surrender to Mexico for the further charges of “deprivation of liberty”. However, they were bailed out from the custody in which Leland and Tim Chapman’s bail was arranged at $100,000 each, while Duane “Dog” Chapman was set at $300,000.

Leland is a muscular guy with the height of 5 ft 6 inches tall and weighs 68 kg. His eye color is brown and hair color is also brown. Leland has also several tattoos on his body and in both hands. Furthermore, there is not any information regarding other body measurements.