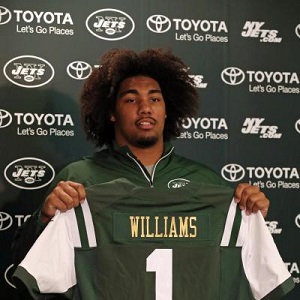 Leonard Williams is in a relationship but he has kept his personal life private and out of the spotlight. He usually doesn’t talk about his private life in media and public.He has not clarified about his married life, affair, girlfriend, and spouse till the present time. He has a daughter named Leana. The name of his daughter’s mother is undisclosed.

Who is Leonard Williams?

Leonard Williams is an American football player. He currently plays as a defensive end for the New York Jets of the National Football League (NFL). He was drafted by the Jets with the sixth pick in the first round of the 2015 NFL Draft. Leonard has been a 2-time All-American and a 2-time All-Pac-12 selection. In 2014, he was named Team MVP.

Williams was born on June 20, 1994, in Bakersfield, California, USA. He was born to Clenon Williams(father) and Aviva Russek(mother). He has four siblings: Natasha Williams(sister). His father was imprisoned for robbery when Williams was a child. He was raised by a single mother. His nationality is American and he is of African-American ethnicity. He attended Mainland High School in Daytona Beach, Florida, where he was a two-sport athlete in football and track. He was ranked as the fifth best strongside defensive end recruit in his class. After that, he played college football at the USC Trojans Football of the University of Southern California. As a sophomore in 2013, Williams was moved from tackle to defensive end. At that time, he was a named a first-team All-Pac-12 selection and was an All-American by ESPN. He was named Team MVP and first team All-Pac-12. He was also named an All-American by the American Football Coaches Association (AFCA) and ESPN.

Williams began playing football at a professional level in 2015. In May 2014, he was projected a top-4 selection in the 2015 NFL Draft by various mock drafts. He was drafted by the New York Jets with the sixth pick in the first round of the 2015 NFL Draft. He was the highest selected USC defensive lineman since Darrell Russell in 1997. Williams signed a four-year, $18.6 million contract on May 8, 2015. He made his professional debut on August 11, 2015, in the first preseason game against the Detroit Lions. He was selected as a first-team alternate for the 2017 Pro Bowl. Leonard is a two-time All-American and a two-time All-Pac-12 selection. He was named Team MVP in 2014. He has an average annual salary of $4.65 million. His net worth is undisclosed.

Rumors are that Williams is currently having a secret affair with his girlfriend and his current girlfriend is the mother of his child. Currently, there are no other desperate rumors regarding his personal and professional life. It seems he is doing best job without harming others and has been a straight person in his life, for which he has not been in any controversy yet.

He has a height of 6 feet 5 inches with a body weight 137 kg. He has black hair color and his eye color is also black.