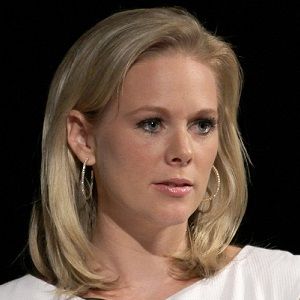 Margaret Hoover got married to her fellow journalist friend and love interest John Avlon on November 7, 2009. The couple is blessed with a daughter Toula Lou and a son Jack. We also thank Hoover, for letting us know that she is enjoying her conjugal life via many of her social posts which are very romantic. Additionally, she or her husband both haven't ever been caught tangled in any extramarital affairs, which points the wedding is going to sustain for a really long time.

Who is Margaret Hoover?

Additionally, she is also a known author of the book American Individualism: How Can The Republican Party Save a New Generation of Conservatives, released by Crown Forum in 2011. Currently, she works as a political commentator for CNN and hosts the reboot of the conservative Firing Line interview series by PBS.

Margaret (Claire) Hoover was born on December 11, 1977. She is a granddaughter of Herbert Hoover, the 31st U.S president.

Afterward, she cleared her B.A. degree from Bryn Mawr College in 2001 majoring Spanish literature with a minor in political science.

After graduating B.A Margaret then enrolled at the Davidson College for two years, but left the college before graduating.

Margaret Hoover's Career As The administrative Officer In The 'White House'

Margaret worked as an administrative officer in the 'White House' for the former U.S. President George W. Bush at the early phase of her career. She became a deputy finance director for the re-election campaign of President Bush in 2004. She then went on to serve as an administrative officer for congressional representative Mario Diaz-Balart for 'Capitol Hill' and worked in the prestigious post of an adviser to the 'Homeland Security Department'.

In 2008, 'Fox News' recruited her for its premium show O'Reilly Factor. She shifted to' CNN' in 2012 and started working as a political analyst. She also made regular guest appearances on other TV channels such as MSNBC, NBC, HBO, ABC to name a few. Not only that, but she is also a well-known columnist for journals like WSJ, The New York Times, The Daily Beast, CNN.Com, and so on.

Apart from journalism, she is one of the best selling authors who released a book "American Individualism: How A New Generation of Conservatives Can Save the Republican Party in 2011".

A 39-year-old female, who participated in several gay and feminist actions, is also an advocate of women's rights, feminism, and the gay rights activist. Marget married another leading journalist, John Avlon, since 2009.

So far, there are no honors under Margaret's name but Hoover is a member of the board of directors at the Hoover Institution of Stanford University and the boards of the Herbert Hoover Presidential Library Association and the Belgian American Educational Foundation.

She serves on the American Foundation for Equal Rights and GOProud's Advisory Council. Hoover is also equally dedicated to spreading the legacy of Herbert Hoover, her great-grandfather.

Happy Birthday @HerbertHoover31! Your unrivaled humanitarian contributions and lifetime of public service inspire all who know your story. On this 145th birthday it’s my wish that a new generation of Americans come to understand why they called you “the Napoleon of Mercy”.  pic.twitter.com/daH6rBHolt

For all her contributions, The Algemeiner named Hoover as its Journalist of the Year for her work on Firing Line in May 2019.

Margaret Hoover isn't just small-time TV figure but someone with a political background and family legacy, she so far remains true to her work ethics and belief system. With experience in some of the leading networks, she definitely earns over $200 thousand as a political journalist, columnist, and pundit.

Know: How Rich is Reporter Heidi Przybyla Also Read If She Is Married?

Added that, she is the best selling author and she receives an added sum in the form of royalties from the book sells. Moreover, her husband John Avlon is also a known reporter for CNN bagging $150 thousands in salary. 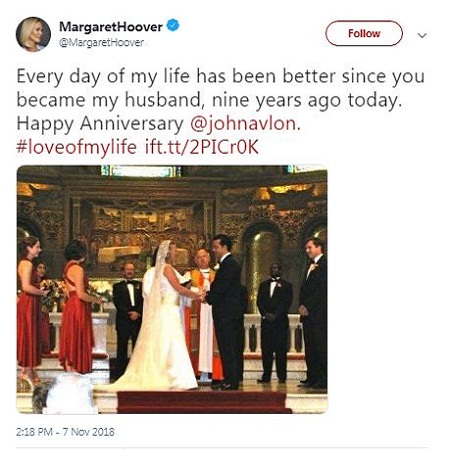 Margaret Hoover Sharing The memories of her Wedding day
Twitter

Hence, we expect her net worth to be in a higher-order seven Figures. Hence, her total asset should be over $5 to $6 million as of 2019.

Margaret is not so much of a controversial journalist but she was caught into controversy following the events after FOX News veteran Bill O'Reilly was terminated by Fox News as the consequence of his lewd behavior.

When Margaret imparted her experience with Bill she expressed that he in some cases made her feel awkward but she didn't propose him being excessively outrageous against many co-workers who claimed Bill over multiple cases of sexual harassment.

Margaret Hoover is actually an attractive lady who is 5 feet 6 inches tall in height. Added that, her bust size is 32", belly measures 24" with 35" inches hips.

Caucasian American, Hoover's hair color is blonde and has a pair of brown eyes.