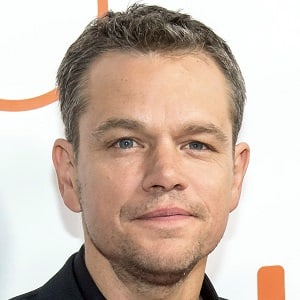 Matt Damon dated the American doctor Skylar Satenstein in 1989. For a year, he also dated English actress Minnie Driver. He also had a three-year relationship with actress Winona Ryder from 1997 to 2000.Damon has also dated Kara Sands, Odessa Whitmire, and Rhona Mitra. Currently, he is a married man. He is married to Luciana Barroso Damon. The pair met on the set of the comedy film ‘Stuck on You’. They later got engaged in September 2005 and eventually married on December 9, 2005. The couple has three children, Isabella Damon, Gia Zavala, and Stella Zavala.

Who is Matt Damon?

Matt Damon is an American actor, screenwriter, and producer. People recognize him for his starring roles as Jason Bourne in the Bourne franchise. Additionally, he has also appeared in several other movies including the Ocean’s trilogy, ‘The Martian’, and ‘Invictus’ among others.

Damon was born as Matthew Paige Damon in Cambridge, Massachusetts on October 8, 1970. He was born to parents Kent Telfer Damon and Nancy Carlsson-Paige. His mother was an early childhood education professor at Lesley University and his father was a stockbroker. His siblings are Kyle Damon and Sarah Bradford. Damon’s parents divorced when he was two years old. Additionally, he also has a brother Kyle who is an accomplished sculptor and artist. He developed an interest in acting since his childhood years. He is of American nationality. Furthermore, he belongs to a mixed ethnic background of English, Scottish, Welsh, Finnish, Swedish, and Norwegian. Talking about his education, Damon attended Cambridge Alternative School. Later, he also attended Cambridge Rindge and Latin School. Eventually, he attended Harvard University.

Damon initially appeared in numerous theater plays including ‘Burn This’ and ‘A… My Name is Alice’. He made his film debut at the age of 18 in ‘Mystic Pizza’. Eventually, he had a role in ‘Geronimo: An American Legend’. He and Ben Affleck wrote ‘Good Will Hunting’ in 1997. In 1998, he played Private Ryan in ‘Saving Private Ryan’. In the same year, he also appeared in ‘Rounders’. Next, he had a series of roles in movies including ‘Dogma’, ‘The Talented Mr. Ripley’, ‘The Legend of Bagger Vance’, and ‘Finding Forrester’. Since then, he has appeared in numerous other movies and television series. Furthermore, he has also written and produced several movies and television series. All in all, he has over 75 credits as an actor. Some other movies and television series that Damon has appeared in are ‘Deadpool 2’, ‘Suburbicon’, ‘Downsizing’, ‘The Great Wall’, ‘Jimmy Kimmel Live!’, ‘The Monuments Men’, and ‘30 Rock’ among others. Apart from his acting works, Damon has also produced several movies and shows including ‘Incorporated’, ‘The Runner’, and ‘Speakeasy’ among others. He has over 15 credits as a producer. Furthermore, Damon also has 3 credits as a writer. He is the founder of H2O Africa Foundation which is a charitable arm of the Running the Sahara expedition. Additionally, he is also an ambassador for ONEXONE. Damon won the prestigious Academy Award in 1998 for ‘Good Will Hunting’. In addition, he has also received the Oscar nominations other 4 times. Furthermore, he has also won the Golden Globe, All Def Movie Award, EDA Award, American Cinematheque Award, and ACCA among others. All in all, he has 36 wins and 141 nominations to date. Damon has not revealed his current salary. However, he has an estimated net worth of around $ 170 million at present.

Damon’s comments on sexual assault last year received several criticisms. He later apologized for his comment. Additionally, he also became part of a controversy after he said that Louis C. K. can be forgiven for his sexual misconduct accusation. At present, there are no rumors concerning his life and career.

Talking about his body measurement, Damon has a height of 5 feet 10 inches or 178 cm. Additionally, he weighs around 185 lbs or 84 kg. Furthermore, his hair color is light brown and his eye color is blue.