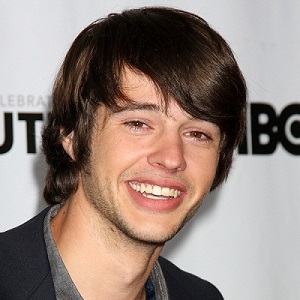 The 28 years old Matt Prokop is an unmarried actor however he had a relationship with several women in the past. He dated young and gorgeous American actress Jemma McKenzie-Brown for few months in 2008. The reason behind the break-up hasn't yet disclosed in the media.  After his break-up with Jemma, he started dating charming- Geek co-star Sarah Hyland. The relationship lasted for some years however ended with the breakup in August 2014. n August 2014 Hyland was granted a provisional order to restrain Prokop as he abused Hylan allegedly physically and verbally over the last four years. The restriction order was continuous in October 2014.

Who is Matt Prokop?

Matthew Beam Prokop mostly known as Matt Prokop was born on 29th July 1990, in Victoria, Texas, the USA. He is an American by nationality and he is of mixed (Czech, English, Scottish, German, and Welsh) ethnicity.

Matt is the youngest of two children of his parents Debbie Prokop and father Tony Prokop. He grew along with Stephanie Prokop. He was interested in acting from his child age and at the age of 16, he moved to Los Angeles for his career.

Must Know About: Ryan Rottman Biography

Regarding, Prokop's education he was homeschooled and graduated from there. Then he moved to Los Angeles for his career.

Matt Prokop begins his career from a very early age as an actor. He made his first official movie debut playing the character Zack in the short movie Marked in 2007. Following, he played as Jimmie in the hit drama film High School Musical 3: Senior Year. He appeared as a guest on the film Medium (2009) as Kyle Covington for one episode.

In 2010, he played in the Brendan Fraser film Furry Vengeance. playing as the role of Fraser’s son. Further, he played in several films such as Monster Heroes, Cougar Hunting, Conception and many other.

Besides playing on films, she also played in numerous series such as Hannah Montana, The Office, In the Motherhood, Good Luck Charlie and many other. Concerning his awards, he is yet to be honored with awards.

Matt Prokop: Salary and Net Worth

Matt Prokop's net worth is reportedly around $500,000 as of now and still raising. He currently young and is currently succeeding on his career. He has played in several hit film and TV series such as Geek Charming, Conception, Struck by Lightning and many more.

Besides, his annual salary is yet to be disclosed in the media.

Matt Prokop has ideal body figure with a stature of 5 Feet and 11 Inches. Matt has dark brown hair and brown eyes. His body measurements along with weight and another body insists haven't disclosed yet.

Have You missed: Eric Stoltz Biography