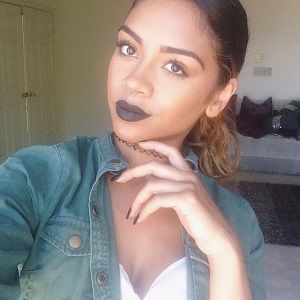 The 20-year-old American social media star, Taylor is an unmarried woman but she is currently in a living-in relationship with Nash Grier. The couple started dating in April of 2016. Since then they have maintained a sound relationship. As of now they are engaged and are expecting a baby. Yes! Taylor is pregnant with Nash Grier's baby. Except for Nash, Taylor has never been seen with anyone. Currently, Taylor and Nash are enjoying their love life and living elegantly.

Who is Taylor Giavasis?

Being famous is easy but what you do with your fame is what actually matters. Taylor Giavasis is an American social media icon famous for her body positive photography. She currently has more than 524.6k Instagram followers on her Instagram and also has around nearly 93k people following her on her Twitter.

Despite being a girlfriend of a successful youtube and Vine star Nash Grier and daughter of famous Hollywood actress Nikki Giavasis, she has made her own identity as an Instagram photographer. Engaged to Nash in 2019, she is also a mother to be as she is expecting NAsh's baby.

Fun things that are happening inside me: Lots of baby kicks! ( I can even sometimes see it ) Baby can hear now! Not so fun things: My ribs feel like they’re breaking I overheat I can always use a nap

Taylor the only child of her Actress-model and writer mother Nikki Giavasis, she is a celebrity child born on August 10, 1997, in Canton, Ohio to Nikki and Bobby Cutts, a convicted Murderer. She is the only daughter of Nikki Giavasis. She is an American social media influencer, model and a photographer with biracial (African and white) ethnic heritage.

The bold and stunningly beautiful Taylor Giavasis is an internet sensation that puts its trademark on Twitter and on Instagram. The bold internet personality made her Twitter debut in 2011 tweeting "Lesson learned: think before you do." Ohio-born personality is never shy about showing some skin and often posting pictures of her sporting her perfect curves in a bikini.

She's often aspired women to publish their nude photographs and love the way they look at Instagram. Taylor launched this controversial project The Naked Diaries in 2015 and got an excellent reaction from her supporters and earned much-needed popularity.

However, her boyfriend Nash Grier is an American Vine star who is famous for his Vine videos and youtube channel. Together with his management released mobile games and social media apps like Cash Dash, Mobli, and Challenged, the blue-eyed heartthrob is the vine specialist. Nash is ready to appear alongside Bella Throne in You Get Me in 2017.

Taylor Giavasis started a controversial blog, Instagram and Twitter where she motivates people to post nude pictures. She recently caught media attention after she announced that she was pregnant with a baby.

She is frequently seen posting pictures of her baby bumps and also did a maternity photo shoot. She is also criticized for being Bobby Cutts' daughter, but it's so magical to see how she takes all the negativity and transforms it into positive and more creative visual art.

She once shared a post on her official twitter with a ring in 2016, which made everyone to believe that she was engaged to her boyfriend but later it turned out to be a fun troll she had pulled out of her bag of tricks on her fans.

Finally, on 26th March 2019, she got engaged which was days after she outer that she was pregnant.

Moving towards her body estimations, she's got exquisite black eyes and dense black hair. She is 5 foot 5 inches tall in height and possesses a very attractive body figure.

Why see the world when you got the beach