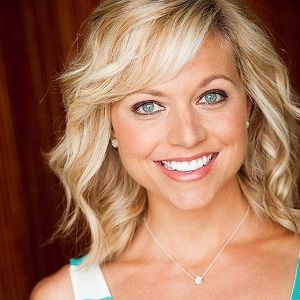 Tiffany Coyne, this 35-year-old American dancer, and model is a married woman. She tied the knot with her longtime boyfriend Chris Coyne. However, there is not an exact date of her marriage. Together, they have also welcomed two children Scarlett Rose in August 2013 and son, Carter Liam Coyne was born in February 2018.Since their marriage, they have maintained a sound relationship with them. Furthermore, there is not even a single rumor of dispute between them.Apart from him, there is not a single affair of her with any man. Currently, Tiffany and Chris are enjoying their married life and living elegantly.

Who is Tiffany Coyne?

Tiffany Coyne is a model and dancer from America. She rose to fame after replacing Alison Fiori on Let’s Make a Deal in 2009. Furthermore, she has also worked for ‘Chase Bank’ and ‘United Airlines’ and also made guest appearances on The Price is Right and The Bold and the Beautiful.

Tiffany was born on May 6, 1982, in Layton, Utah, United States. Talking about her nationality, she is American and her ethnicity is German-Hungarian. Her mother is Hungarian and father is German. She has two sisters, five step-sisters, and two step-brothers. Her mother liked building houses so she got the chance to explore many places during her childhood. As a child, she developed her interest towards dancing and starting dancing at the age of three. Moving towards her education, she completed her high school education at Northridge High School in Layton.

Tiffany began her career as a dancer. Initially, she used to perform for two seasons with the America First Jazz Dancers for the Utah Jazz. At that time, she also taught dance classes. After working for Utah Jazz, she started to perform on a cruise ship, where she traveled Denmark, Sweden, Russia, and Norway. Moreover, she has also worked as a dancer for Jubilee!, Fashionistas, and Sirens of TI. She rose to fame after replacing Alison Fiori on Let’s Make a Deal in 2009. Furthermore, she has also worked for ‘Chase Bank’ and ‘United Airlines’ and also made guest appearances on The Price is Right and The Bold and the Beautiful. Additionally, he has also starred in a couple of famous TV shows including The Price Is Right, The Bold and the Beautiful, The Late Late Show with Craig Ferguson. Being a famous model and dancer, she pockets a handsome amount of money from her profession. However, her salary and net worth are unknown. As of now, she has not won any awards in her career.

Rumors were that she is pregnant, but later the rumors were confirmed and she revealed that she was expecting. And on 26 February 2018, she delivered her baby boy and named him Carter Liam Coyne. As she has full focus on her work, Tiffany has never been involved in any controversial stuff.

Tiffany has a height of 5 feet 8 inches and weighs 56 kg. Furthermore, she has a pair of gorgeous blue eyes and blonde hair. Additionally, her other body measurements include 35 inches bra size, 24 inches waist, and 36 inches hip size.